Spring 2022 has been the final phase of the Prepare Ships project, and it has indeed been a busy time. After the test campaign, held in August 2021, The project partners has spent time to fine tune and adjust their tools and systems for the final test campaign that was carried out in the end of April. The project rounded off with at Final Conference on May 3 in Gothenburg, where the final results were presented by the team.

The Prepare Ships project officially ended in May 30, 2022, but the work will live on in different ways. In this news letter you can read more about the final phase and do not hesitate to contact the team members if you have any questions.

The final test campaign was carried out between the 18th and 21st of April, 2022 in Gothenburg’s archipelago. In this final test campaign, the final version of the “Prepare System”, Prepare Ships solution for reducing vessel positioning uncertainty, was tested in three different vessels: the RoPax ferry Stena Germanica, the Princess yacht M/Y @Sea, that the rescue runner Märta Collin.

Here you see three vessels during a productive second day of the Prepare Ships April Test Campaign!
M/Y @Sea, SSRS Märta Collin and M/S Stena Germanica came together in Gothenburg’s archipelago, with today’s focus on exchanging ECDIS routes and our new dynamic predictor via VDES between the ships, to great success! With a few clicks in the TELKO ECDIS, we were able to transmit and receive routes and predictors, something which is not possible today and speaks to the synergy between our project partners. But it’s one thing to know that our solution work on a technical level. To achieve our goal of improving navigational safety, we put high value on receiving input from the navigators who will end up using those solutions. That’s why our team joined onboard Stena Germanica on her overnight trip to Kiel to test more functionalities together with the bridge team.

Additional, the Prepare Ships system was tested in the full mission bridge simulators located at Chalmers University of Technology to evaluate the impact of the system on safety and the environment. 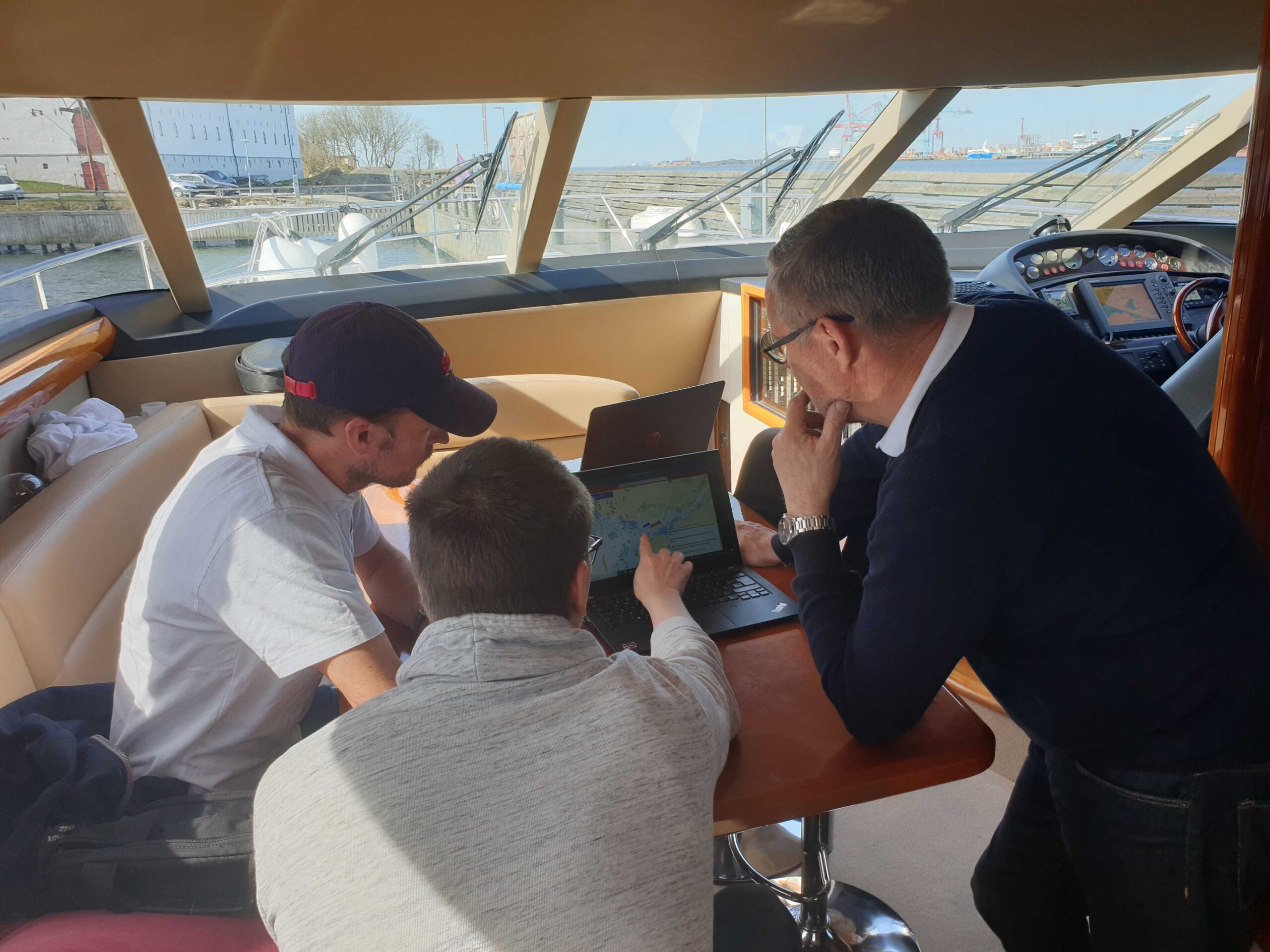 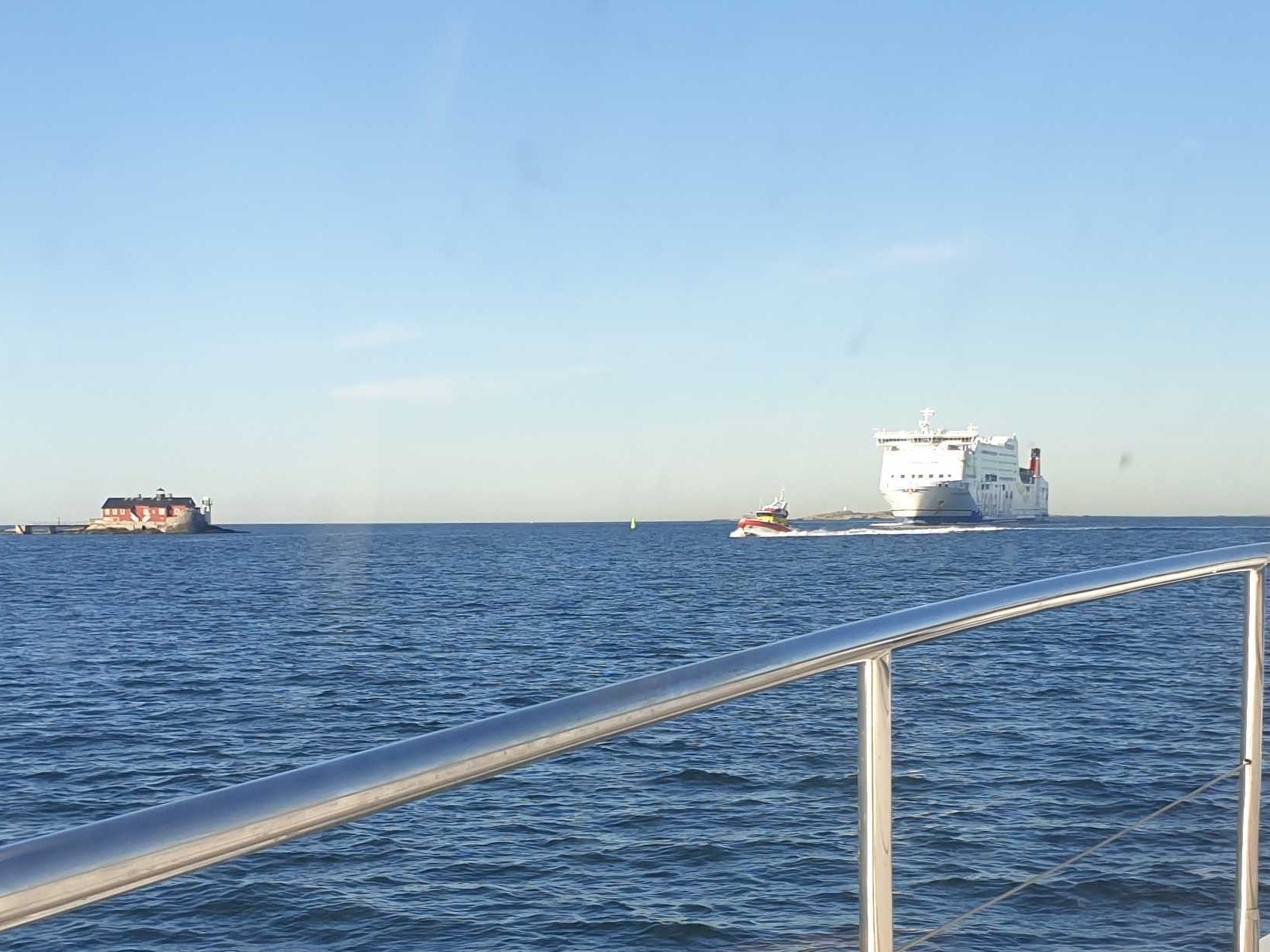 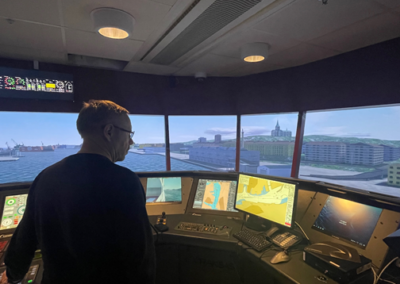 SAAB mainly tested the VDES interoperability with other equipment from a system perspective in real situations and how the obtained VDES performance affected the system behavior. They also logged VDES data during the test scenarios for further evaluation after the tests.

Challenge and outcome
The challenge was mainly coordination between the participating VDES units to ensure correct parameter setting etc. for each test. Especially in the scenarios we could not directly control.

SAAB hopes for an overall stable and reliable communication solution which utilizes the advantages of VDES, within the currently known limitations. Are you interested to know more about the VDES technology? Read more here. 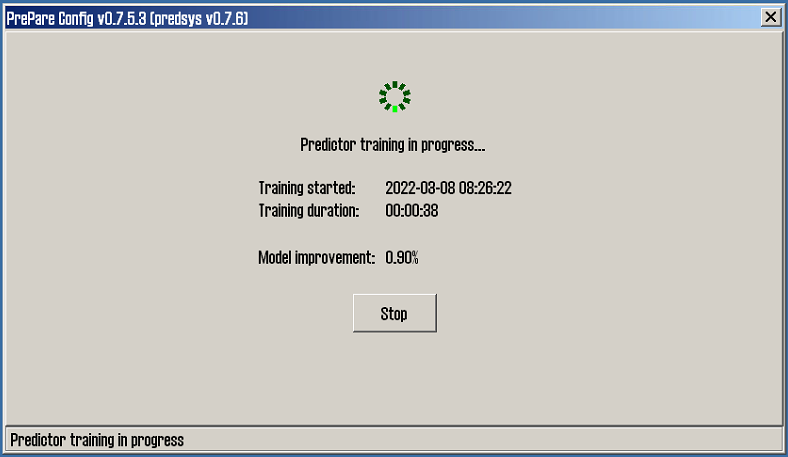 In the final test campaign of the Prepare Ships project the predictor system was tested onboard Stena Germanica.

Initially, the predictor system will predict the future motions of the Stena Germanica based on a generic dynamic model of the ship. Afterwards, once the predictor system has had time to capture some data, it will improve itself through “training”. Will the training succeed and improve the predictions? If so, by how much? 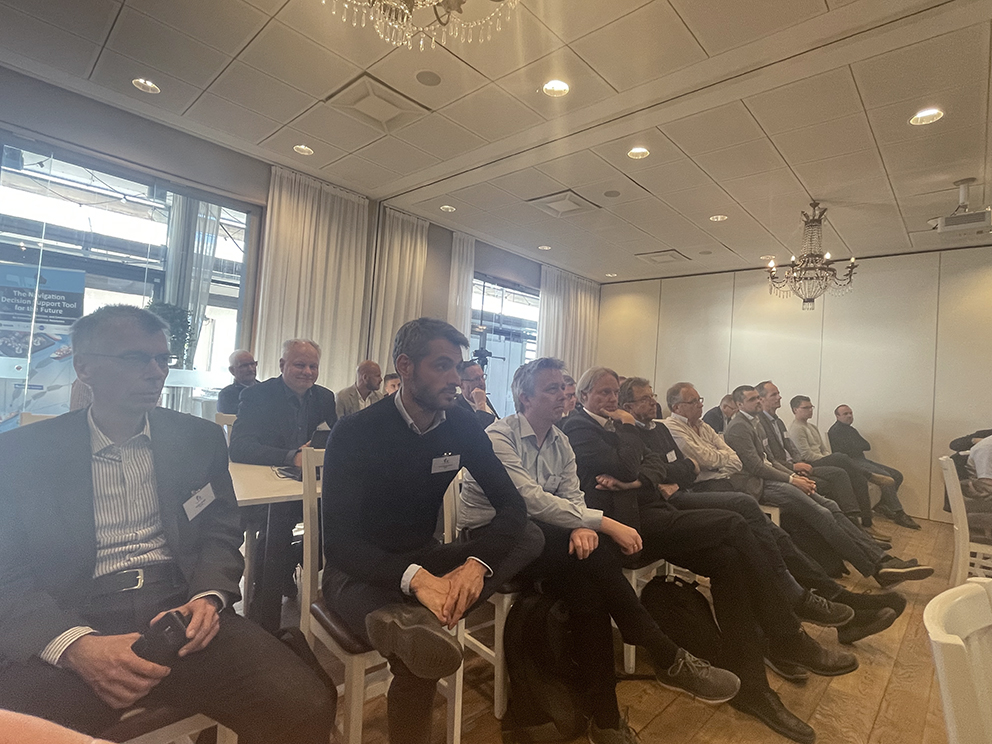 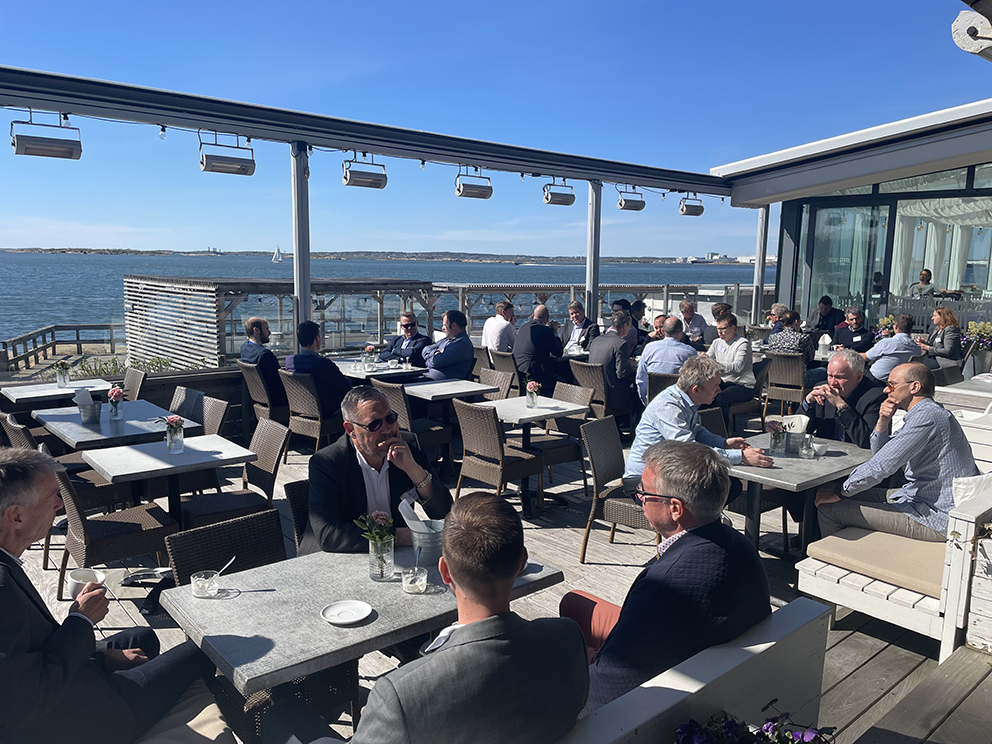 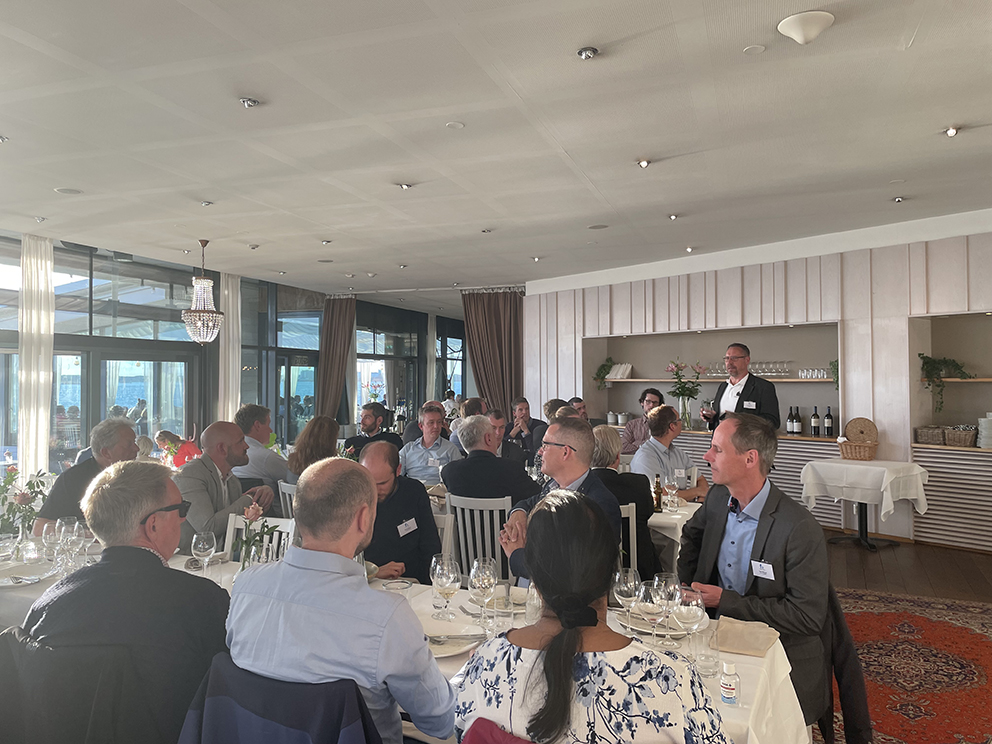 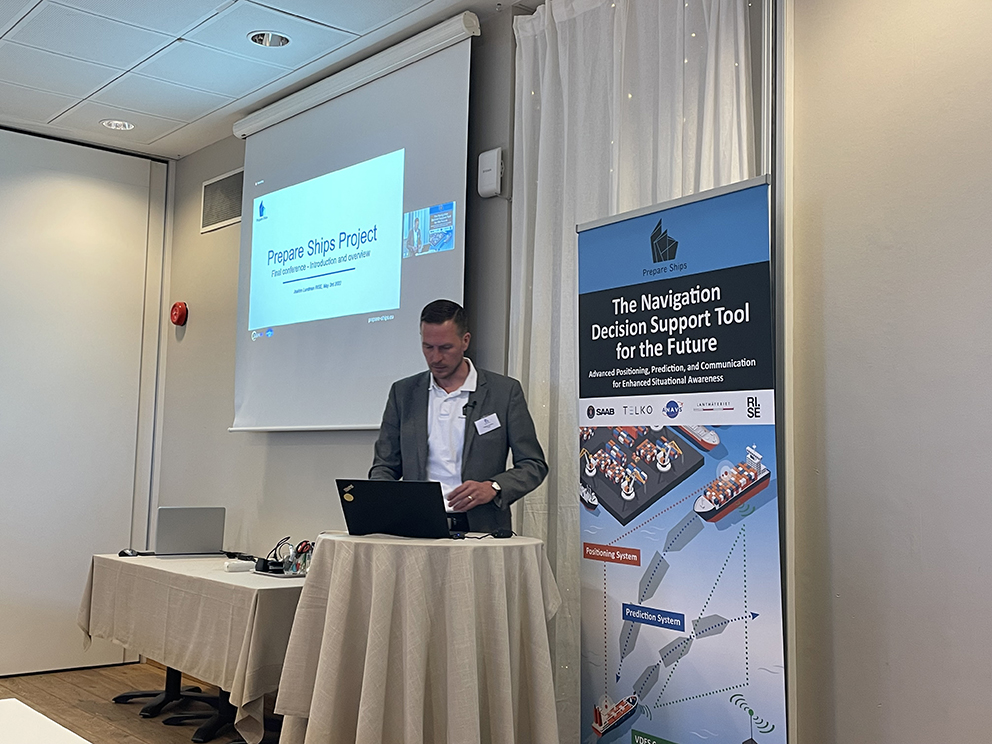 The Prepare Ships project concluded with a final conference on the 3rd May, 2022. During the conference, the capabilities and technical details of the Prepare System were presented. Its relevance for maritime safety and operations and was discussed with help of the guest speakers Carmen Aguilera from EUSPA, Henrik Tunfors from the Swedish Transport Agency, and Øssur J Hilduberg, Head of Dannish Maritime Accident Investigation Board.

In its own, the Prepare System has the potential increasing the safety and efficiency of maritime operations by providing highly accurate positioning and predictions of the future movements of the vessel. Furthermore, the technical solutions developed within the project for the Prepare System are also foundational work for the development of Maritime Autonomous Surface Ships (MASS) and connected ships. Highly accurate positioning at sea is a cornerstone technology for the development of MASS, while VDES provides a maritime specific communication link that can be used for ship-to-shore and ship-to-ship communication.

Where do we take it from here? Learnings, possibilities, and challenges for the future

Peter Bergljung, Saab TransponderTech
For Saab, Prepare Ships has been a major and timely effort with respect to VDES research and development. During these years with Prepare Ships the development of VDES has also stepped up at Saab and also globally and interest from user groups has been expanding. Still we have some major work to accomplish in the future after Prepare Ships, before VDES will be declared SOLAS mandatory equipment and replace AIS in SOLAS Chapter V.

Saab made a final presentation of VDES with respect to Prepare Ships performance at IEC WG15 meeting in Aalborg 25 may 2022 and the international standardisation group appreciated the work done by Prepare Ship with respect to these advanced and important applications (Predictor and N-RTK) and using terrestrial VDES most advanced parts.

Saab is now preparing for full scale production of the shipborne VDES transponder based on the prototypes we used in Prepare Ship project. https://www.saab.com/products/r6-supreme. First product shipborne units will be delivered in autumn 2022 for installation on SOLAS vessels. In these units terrestrial VDES but also functions for satellite VDES will be integrated. These R6 AIS/VDES shipborne units will be type approved for AIS and contains the VDES functions described in ITU-R M.2092-1 paving the way for a type approved and SOLAS mandatory by 2026 time frame pending IMO MSC decisions.

As open source the developed Lantmäteriet Adjustment Solution (LAS) could easily be applied in many countries with an already established CORS infrastructure. In addition, maritime safety requirements puts extra demands for integrity of the positioning solution, as the position not only need to be accurate but also reliable. Therefore, additional integrity information has to be provided within the correction data stream. This is achieved with the, within Prepare Ships developed, Lantmäteriet Integrity Solution.

Standardization of proposed solution poses a challenge for achieving a solution that is globally applicable. Another challenge is harmonization between reference systems which differs globally. Result from this project serves as proof of concept of the suggested solution, and might serve as basis for future standardization.

Patrick Henkel, ANavS
Within the scope of the Prepare Ships project, ANavS further developed its multi-sensor, multi-frequency, multi-GNSS and multi-antenna positioning module for the maritime industry.

The needs for high accuracy, availability, and robustness were addressed by integrating both RTK and PPP techniques into the ANavS module. RTK and PPP are two very complementary positioning techniques: RTK uses corrections from reference stations, that can be applied in the coastal area and that are typically transmitted via a terrestrial data link. PPP uses corrections in state-space representation, that are applicable also on the ocean far from the coastline and that are transmitted directly via GNSS satellites besides terrestrial data links. The advantage of RTK is its faster convergence and slightly higher accuracy. The advantage of PPP is that it does not need any terrestrial communication link and that it is independent of any commercial service provider.

For PPP, ANavS integrated the Galileo High Accuracy Service (HAS) as one of the first companies in the world. Moreover, ANavS considered the particularities of maritime navigation, e.g. the determination of the course over ground and heading as separate quantities, the filtering of the position and attitude information to reduce high-frequency variations caused by shipborne vibration, the impact of the high inertia of ships on the movement model, and various maritime standards (e.g. IEC 60945). A sub-decimeter positioning accuracy and a heading accuracy of 0.01° were successfully demonstrated in the project on the Stena Germanica.

The interfaces of the ANavS Multi-Sensor RTK/ PPP module were adapted to the maritime standards to enable a direct connection of the VDES module developed by SAAB as well as of the TECDIS developed by Telko including the predictor of the project leader RISE.

Luis Sanchez-Heres, RISE Research Institutes of Sweden
The ”Predictor System” is the software that predicts the future movements of the vessel were the Prepare System is installed. This system was completely developed for the Prepare Ships project; however, it’s development will continue after the project’s conclusion. At the moment, the ambition is to open-source the software so that it can be used as a “reference implementation” for developers of maritime decision support systems (such as an ECDIS). Furthermore, the Predictor System will play a key role in the future projects of RISE Maritime Operations.